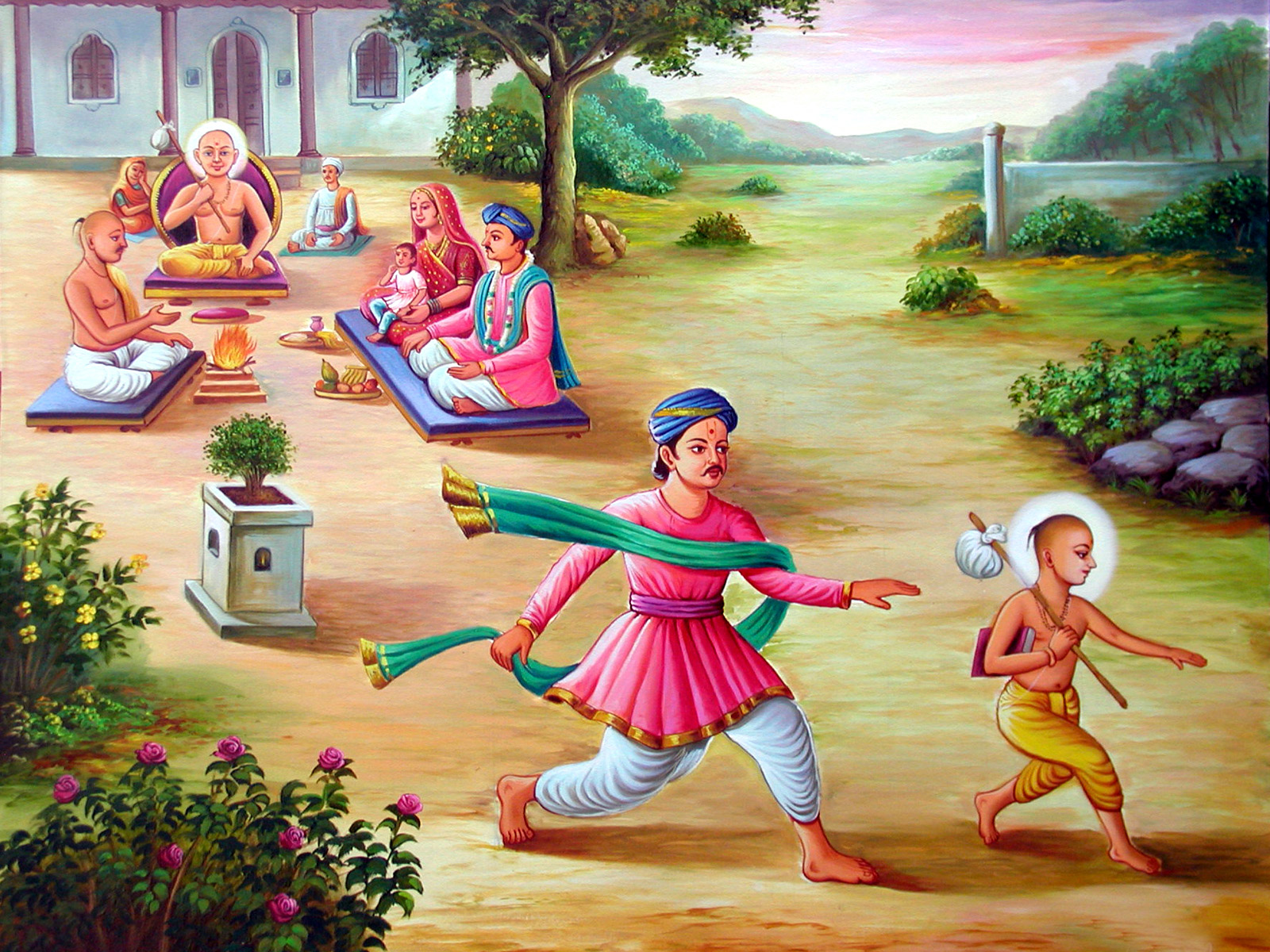 Ghanshyam is now seven years old and it is time to give Him a 'Janoi' (sacred thread) or Yagnopavit. Dharmadev calls a learned Brahmin to find an auspicious day (Muhurat) and Monday Fahgan Sud 10 1845 is chosen. Dharmadev begins preparations for this ceremony. This is very important day in the life of a brahmin as He will become a Dwij a Brahmin - twice born). Invitations are sent to all Brahmins in Ayodhya, their relations, friends and sadhus. The street is decorated and a mandap is set up with beautiful fragrant flowers.

On the 10th day, Brahmins recited stotras (shloks), ladies sang religious songs and Havan was performed. Ghanshyam's head was shaved and He then took a bath. He wore a Peetamber (yellow silk dhoti) and then stood under the mandap with His parents for the ceremony to begin. While the ceremony was being performed, the gods including Bhrama, Vishnu and Shiva came to have darshan. Dharmadev blessed Ghanshyam by placing his right hand on Ghanshyam's head and gave him a Guru Mantra, 'Shree Krishna Saranam Mama' (O Lord Shree Krishna, take me under your protection. I have come toe.) Dharmadev said, ""my Guru Ramanand Swami gave this mantra to me at Prayag, I now give it to you."" Ghanshyam was pleased and bowed to his father with respect. Ghanshyam then put on the clothes of a c theelibate, a waistband, and held a moonj grass in his hand. He also held a stick made from the 'Palash' tree and a begging bowl. Bhaktimata was the first person to give Ghanshyam 'alms' and then others followed. After the ceremony, Dharmadev gave gifts to the Brahmins and fed all those who were present.

It has become a custom and part of the ceremony that the young dwij try to run to their Guru and their mama's will run after them in order to bring them back. Following this custom, Ghanshyam set off on his ceremonial run chased by his Vishram mama, but He had no intention of coming back, or even to see His guru. He wanted to head fro the Himalayas where He would begin his goal of spreading Dharma. There was no chance of Vishram mama catching Ghanshyam who could have got to the Himalayas in an instant. However, Ghanshyam felt that by running away, He would greatly upset his parents. He therefore slowed down to allow His exhausted mama to catch him. They both returned home with Ghanshyam sitting on his mama's shoulders, and the janoi ceremony was completed.

Ghanshyam then stayed home to serve His parents, He also started studies of Vedas and He learnt them very quickly. Whatever Ghanshyam learnt, He used to write it down in a small book, which He lovingly preserved. During this period, He continually thought of His reason for taking birth on the earth - to eradicate the burden of evil and sin, and spread true Dharma on Earth.