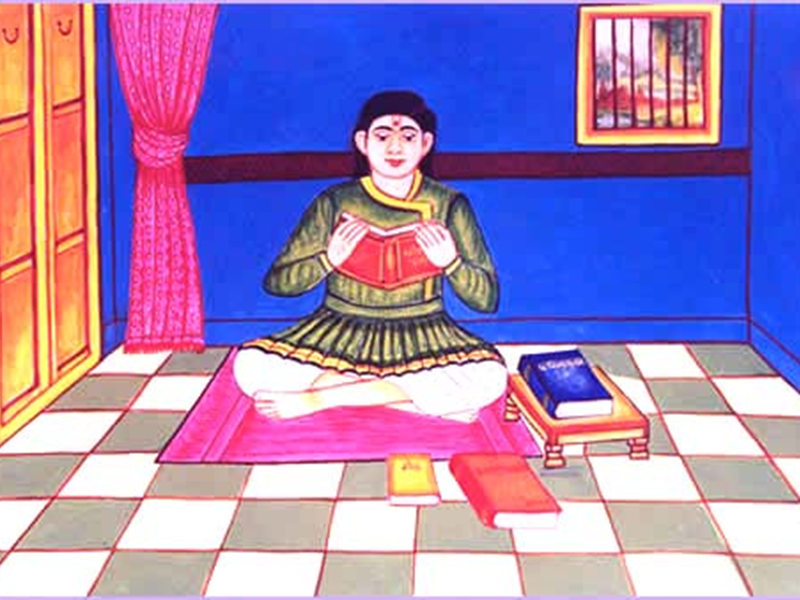 Child Ghanshyam began to study at a very early age. His father Dharmdev was a great man. Ghanshyam said, “Father, only you teach me.” On hearing this the father was pleased. He taught Ghanshyam some stanzas [SLOKAS]. Ghanshyam would listen to him very carefully and what ever he would listen to, he would try to keep in his mind. Whatever once heard (listened) belonged to him. He remembered all the stanzas (slokas) by heart.

Now his father taught him stanzas of prayers. These are called STOTRAS. Ghanshyam learnt them by heart. Then his father made Ghanshyam read stories from the scriptures one by one and he completed all eighteen. It was time for Ghanshyam’s religious thread -ceremony (Janoi). Ghanshyam became a Dwij (a Brahmin-twice born). His study of vedas started. He learnt anything within twelve days whereas others will take twelve years to learn. Great learned men were surprised: “What a wonderful boy! Nothing is required to be taught to him; he learns everything himself.” Ghanshyam would smile and say, “Only absorption to learn is needed. If you have absorption, everything would come naturally.” Whatever Ghanshyam learnt, he used to write it down in a small book. He used to preserve this small note-book.

Dharmdev blessed Ghanshyam by placing his hand on Ghanshyam’s head. When the study was over, Dharmdev gave Ghanshyam the Maha Mantra of eight syllables. SHRI KRISHNA SHARANAM MAMA. O Lord Shri Krishna, take me under your protection. I have come to thee! He said, “Ghanshyam, my teacher Ramamamda Swami gave me this Mantra at Prayag. I am giving it to you.” Ghanshyam was highly pleased and bowed to his father. Shriji Maharaj has shown us, through this lesson, how to study and honour the teacher.