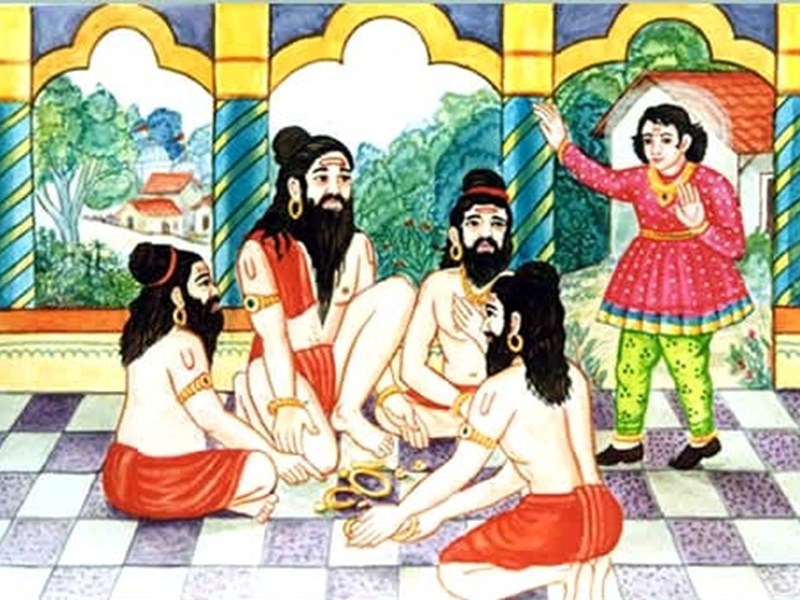 There is a temple in Ayodhyapari named Hanumangadhi. The young Ghanshyam often went there to have a darshan. He listened to the Kathas and devotional songs there. Once he saw, in a corner, four Sadhus with perfumed bodies, were gambling. They did not have any other clothes on their bodies except for the narrow loin cloth, but the whole body was covered with precious gold ornaments. They had betted these ornaments in the gambling.

Young Ghanshyam saw this and became unhappy. He said to them, “Oh brothers! What are you doing even though you are Sadhus? It is a great sin to gamble.” “We are the disciples of a great teacher,” said the four Sadhus, “who are you to advise us?”
Meantime the teacher of those Sadhus arrived there. He also rebuked Ghanshyam: “We are ascetics. You are a householder. A householder should never advise the ascetics. Get out.” Ghanshyam replied, “Is gambling a quality of an ascetic ? Is it a characteristic of an ascetic to put on ornaments and not clothes? Is it a feature of an ascetic to advise others to worship God and he himself should amass gold and silver? Are passion (sensuousness), wealth, greed, fascination, and ego characteristics of an ascetic?”

The heads of the teacher and the Sadhus were downcast. No one could utter a single word. The people who had assembled there said, “Child- Ghanshyam tells the truth. He is young in age but the greatest in divinity.”

This episode [performance] is an example of young Ghanshyam’s power and impression of divinity.