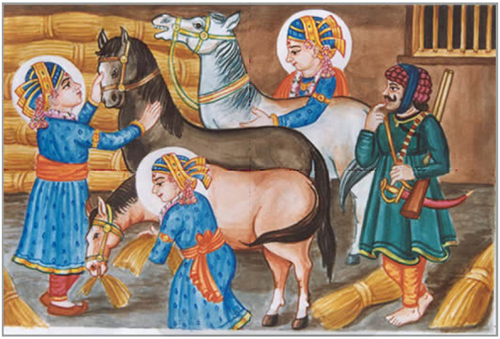 Vadatala was a small village two hundred years ago. It was considered the town of thieves. Joban Paghi was the leader of the thieves. He hailed from Vadatala. So he was known as Joban Vadatalo. He was as dreadful as death (KALA). To cut a fruit and to cut a man into pieces had no difference for him. He was such a huge sinner. His hiding places were in the forest, in dense bushes and in ravines. He raided and robbed villages. He robbed the rich and government treasury as well. Big prizes were offered to one who brings him alive or dead, yet nobody could arrest him.

Such a terrible Joban Vadatalo came to know that Shriji Maharaj was going to arrange a Samaiya of YAGNA in Dabhan. He thought, “Hundreds of people would gather there and I will get much booty.” Joban was specially interested and coveted Maharaja's mare, Manki. He thought that he was capable of robbing kings and princes, hence it would be easier to rob a sadhu or a saint. He assembled all his men and said, “Let us go to Dabhan! You will by getting an opportunity, take away famous Kathiawadi horses and stealthily rob the gathering! I want to have Maharaja's mare. If Maharaja be a God, he will perform a miracle and will not allow us to take away the mare. I want to test his godliness..”

Joban Pagi and his men went mixed with the people at Dabhan. Joban already marked the residence of Maharaja and the stable where the mare was kept. What happened next is narrated below verbatim in the words of Joban Pagi himself as dictated by him to a bard maintaining genealogical tree and family history. “We all went to Yagna. We labored hard for three days and three nights. But we could not get a single opportunity in the gathering. Whenever I saw, I could only see Swaminarayana. My eyes were only on Manki, so I went there at night. Swaminarayan was asleep in a wooden cot. When his personal guards were relieved, I went in the stable covering myself in a dark garb. There were at least a hundred horses belonging to Kathi Darbars and the royal household. Manki was tied on the first peg. As soon as I entered the stable, Swaminarayana, to my utmost surprise, was seen fondling the mare with hands and arranging fodder by his legs. I returned to his residence to verify. I saw him sleeping fast in his bed, and one of the devotees was guarding him and was counting beads. I then, returned to the stable. There I saw Swaminarayana was feeding Manki grain in a nose-bag.

Thus I tried thrice. But I could not find Manki uncared or - unattended. Then in the dawn, I went into the stable with the thought of stealing any horse that came handy to me; I saw Swaminarayan sitting on every horse. He was there even near Manki. Thus I saw many forms of Swaminarayan as there were horses. My pride was dissolved”. The next day I went in the meeting. I took off my turban and placed at his feet. He spoke “Joban Pagi, you kept awake late at night. But could you take the mare?”

I confessed my sin, “I am, hence forth, at your feet. Accept me as your servant-devotee”. He called me nearer. He asked me to hold water in my palm. He chanted some mantra. He put round my neck a KANTHI and placed both his hands on my head.

At the same moment, I felt new light and life enterng my body. I repented for the sins I had committed and fell at his feet. SWAMINARAYAN

He encouraged me saying, “Don't worry, All your sins are pardoned today”. Saying thus, he gave me a big rosary that he carried. Such was the power, lustre of Shriji Maharaj. He stole the heart of the man who had gone to steal the horse. Maharaj is, thus a thief of thieves! Joban Pagi's house was the only house in the whole of Vadtal with one storey. All other houses were made of mud. Maharaj stealthily stayed one month in this house of Joban Pagi. He wished to test the affection of the devotees of Ghadada, so, he came to Vadatal without informing anyone in Ghadhada. Early in the morning, he went to the house of Joban Pagi, but it was closed. He returned and went to Chandan Talawadi to bathe. After sometime, Joban Pagi got up and saw the foot-prints of someone at his door. He minutely observed the foot-prints and concluded that those were the foot-prints of Shriji Maharaj. He treaded into the direction of foot-prints and at last found out Shriji Maharaj at Chandan Talawadi.

Maharaj said, “I want to stay here hiding from the people, would you help me?”.

“I have many hiding places into the mountains and river-ravens”, said Joban Pagi. He further said, “ I will hide you in such a way that even an army of lacs of soldiers would not be trace you out”. Maharaj smiled and said, “I want to stay only in your upper-storey, but no one should come to know about it”. Maharaj stayed in Joban Pagi's upper-storey for exactly a month. Everybody came to know about this only when Maharaj himself appeared at public. Thus Joban's upper-storey became a great place of pilgrimage. It has been preserved in its original form even at this day. Narrating this incident, the poet of HARI LEELAMRIT GRANTHA says:

To know what kind of affection the people of Ghadhada had, Came there in Vadtal almighty Swaminarayan for hiding himself away. A month thus passed away, the people of Ghadhada thus turned into dismay. Ghadhapur - the people of Ghadhada ran helter-skelter in every corner in search of Maharaj. Naja Yogiya vowed that he would not drink the water of Gadhada till he brought back Maharaj to Gadhada. And he himself, by his skill, found out Maharaj in Vadatal. How wonderful Joban Pagi's devotion to Maharaj must have been at whose house Maharaj stayed a month leaving Gadhada! Joban Bhakta placed at the feet of Shriji Maharaj his whole life and property. Why Vadatal has become a great place of pilgrimage is because of Joban Bhakta. Joban Bhakta also donated land in Vadatal for the construction of the temple and, he placed at the feet of Maharaj his whole field.

Joban Bhakta used to take Shriji's CHARANA-RAJ(holy dust under Maharaj's feet) in the dish of his daily meal. When Shriji Maharaj left this world(passed away), Joban Bhakta stored the ashes of Maharaj's mortal remains and used to take the ashes in the dish of his daily meal. Many years passed thus. Once he was sitting at a meal, he came to know that the ashes had exhausted. There and there he cried out “I am also exhausted!” He did not take meal on that day. The next day he passed away. He was 86 at that time.. He served Satsanga for fifty one years. Joban Bhakta was and even to-day is a luminous lamp of the Swaminarayan Sampradaya(sect).