Bhaguji - A Servant To His Highness Shriji Maharaj 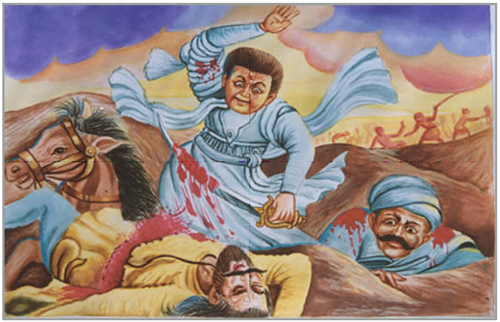 There was a servant/devotee of Shriji Maharaj whose name was Bhaguji. He was a little bit small in size but he was strong. He was clever at using the sword with both the hands. Maharaj always considered everyone his own kith and kin, but some sadhus and other jealous persons were angry with him, and they harassed Maharaj very much. Some of them wanted an opportunity to beat Maharaj but Maharaj moved here and there freely unconcerned.

Bhaguji continuously served Maharaj day and night. Once Maharaj was in Ghadhada. At the time some two hundred enemies invaded Dada Khachar's estate with arms with a view to usurping it. Bhaguji with only twelve men challenged them. During the fight the enemy hit Bhaguji so hard that his right shoulder became useless. In return, Bhaguji hit the enemy so hard with his left hand that both his enemy and his horse were cut into pieces. Bhaguji fought well and drove away the enemies. Bhaguji was wounded at different eighteen places in this fight. He was brought on a cot in the village. Maharaj himself attended to Bhaguji and cured him.

Bhaguji was so brave that great kings used to call him and said, “Come here, stay with us and accept our government service.” But Bhaguji had only one reply to them: “My government is Shriji Maharaj and I am his servant.” Such was Shriji Maharaja's servant Bhaguji.

A devotee in the personal service of Shriji Maharaj is called `Parshad'. Bhaguji was a parshad.