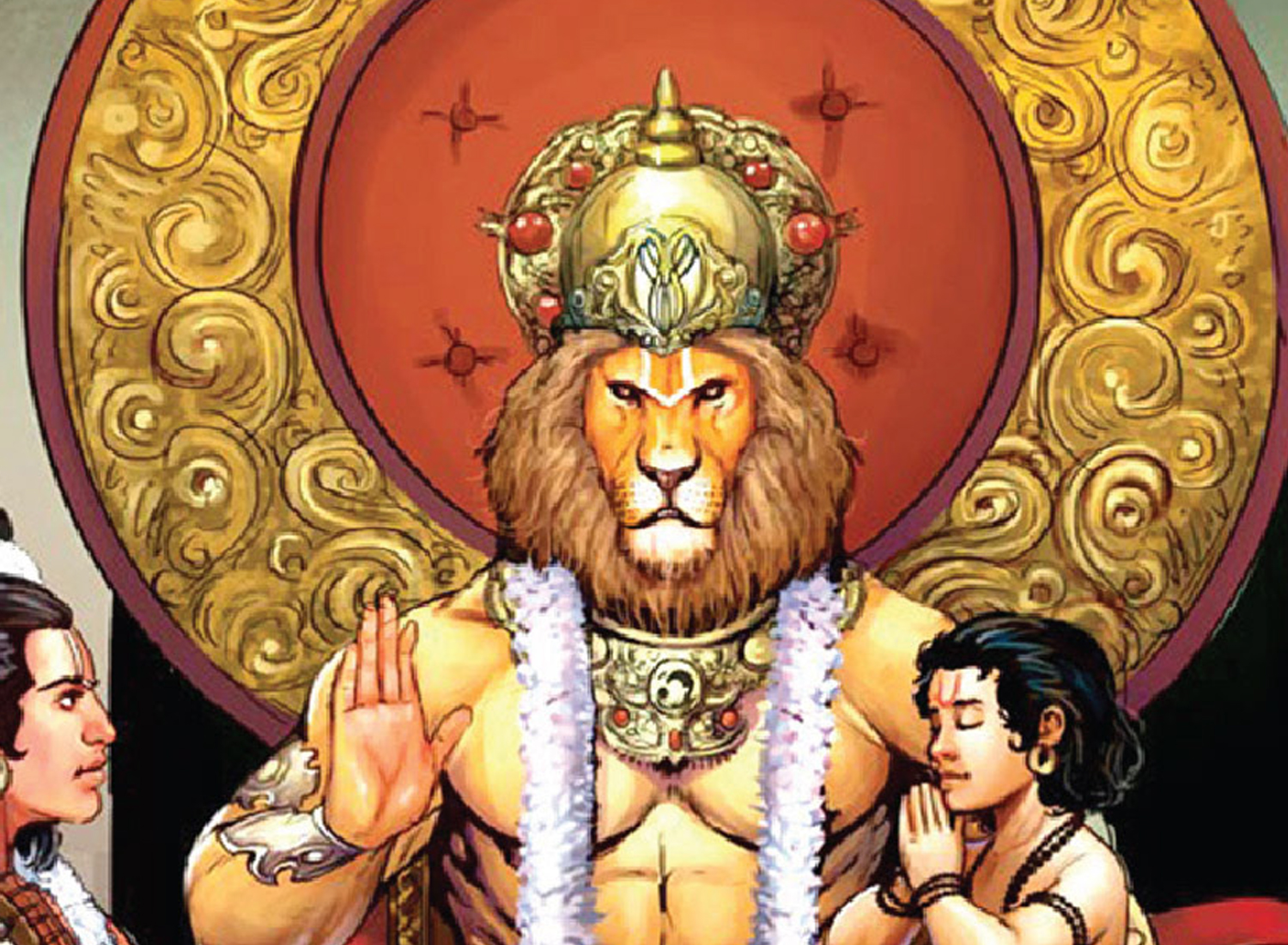 This day is also commonly known as Nrusinh Chaturdashi. (Vaisakh Sud 14) which marks the divine appearance of Lord Nrusinh as (Half man (Nru) - Half Lion (Sinh)) to annhilate the demon King Hiranyakashipu and protect His Devotee Prahalad.

Lord incarnated as Varah (a boar) and annihilated demon Hiranyaksh. This infuriated his bother Hiranyakashipu who vowed revenge upon Vishnu. He performed harsh penance to gain a boon of immortality from Bhrama; the creator. Bhrama though pleased with his penance was unable to grant this boon. Therefore Hiranyakashipu thus that may his death not occur by the hands of man, animal, Demi-God or demon. He may never die, neither indoors nor outdoors, neither during the day nor night, neither by weapons nor mantra (chants), and neither on earth nor sky thus being the supreme amongst all in the three worlds. After successguly receiving such a boon from Bhrama, Hiranyakashipu terrified the three worlds with his atrocities.

Whilst he was engrossed in penance, the child that his wife Kayadhu was expecting frightened Indra who then made plans of kidnapping and then killing her. After abducting her he met Sage Narad who persuaded him to release her. The sage provided Kayadhu with shelter and instructed her to engage in devotion to Lord Vishnu. He daily recited holy texts glorifying the Lord’s divine pastimes. The child in the womb too absorbed the knowledge and induced love for the Lord in his heart.

In the demonic clan of Hiranyakashipu, his wife Kayadhu begot a devotee child named Prahalad who had gain divine knowledge of God in the womb when mother Kayadhu resided in Sage Narad Muni's hermitage.

Hiranyakashipu's atrocities worsened as he forced everyone to worship himself as God and not Vishnu. At the age of five, Prahalad was sent to the demonic school where he was tutored by Shand and Amark, sons of Shukracharya (Guru of the demons) on the demonic ways of living.

Prahalad’s mind, body and soul were solely devoted to Lord Vishnu hence he did not pay attention to the demonic teachings. The teachers complained to his father who found Prahalad’s knowledge blasphemous and raged with anger and hatred. He ordered the gurus to re-train him. On a second occasion, Prahalad’s knowledge of devotion unto Vishnu fuelled the fire of hatred further.

Hiranyakashipu pounced on Prahalad manhandling him like a rag doll and ordered his men to kill him for supporting his enemy. These words were like music to the demons who inflicted a series of atrocities on the devotee.

They jabbed him with spikes, used various kinds of weapons, attempted crushing him under wild rampaging elephants, poisoning through snakes, fed him poisonous food, threw him off a cliff and many other method of killing. However, even after all such ordeals, he remained unharmed due to his staunch devotion and constant protection by Lord Vishnu.

Hiranyakashipu ordered Holika (his sister) to sit in flames and kill Prahalad. She possessed a miraculous fire-proof garment gifted to her my Agni Dev (Demi-God of fire). The garment flew on Prahalad thus he remained unscathed while the fire incinerated Holika.

Prahalad’s education resumed after his gurus were killed by a demon and revived by his prayers to Vishnu. Hence they requested Hiranyakashipu to await Shukracharya’s arrival. Prahalad openly preached the divine knowledge of Lord to all his friends in school and enlightened them into devotion too.

Unable to bear such steadfastness and unflinching devotion to Vishnu, the infuriated Hiranyakashipu once questioned Prahalad on the whereabouts of Lord Vishnu. Prahalad enlightened him that the Lord is everywhere. Holding a sharp sword in his hands, his father inquired whether Vishnu was also in a pillar nearby, to which Prahalad affirmed. Brandishing his sword he struck the pillar which instantly split and the Lord manifested in the form of Nrusinh whose upper half of a lion and lower half of a man.

It was nearing to the evening of Vaishakh Sud 14. A ferocious battle ensued between the Lord and the demon. Lord Nrusinh grabbed the demon like a toy and flung him on his lap sitting in the middle of a doorway. He reminded Hiranyakashipu of his boon. The demon was neither fully inside nor outside, nor wholly on earth nor in the air. It was neither day nor night, but twilight. With his claws, which were not weapons as such, he ripped the demon’s stomach apart thus granting salvation to the demon king.

Lord Swaminarayan elaborated in the third Vachanamrut of Loya that after the annihilation of Hiranyakashipu, Prahald humbly prayed to the Lord, ‘Maharaj!, I am not afraid of this terrifying form of yours. Moreover, I do not consider your protection of me as true protection. Instead, when you save me from my enemy’s army (the Indriyas; sense organs), I shall consider that to be true protection’

Nrusinh Bhagwan consented and coronated the child as king. After his reign, he handed over the kingdom to his son Virochan thus engaging himself in devotion thereafter.