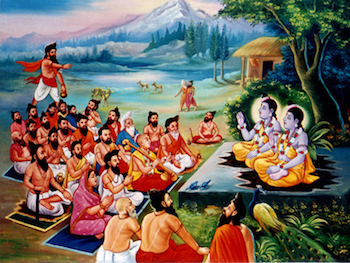 To the north of India is the Himalayan mountain range. As with other mountains, the Himalayas are adorned with snow caps, vegetation and many species of birds and animals. There are also the ashrams of many great saints.

The divine abodes of many devs (demi-gods), including Mahadev are also situated here. The divine river, Ganga also has its source in the Himalayas. The River Ganga splits into 7 separate rivers, purifying the earth with its benevolent flow.

Lord Nar Narayan Dev, the worshipful deities of Bharatkhand also reside in the Himalayas, in a celestial place called Badrikashram, where They are in continuous prayer for the benefit of the souls of Bharatkhand. Shatanand Muni describes Badrikashram, in Bhagwan Shree Swaminarayan’s biographical scripture, Satsagi Jeevan, as the image of Akshar Dham. Here, even the different animals live side-by-side, shunning their natural predatory instincts. The ashram’s residents also includes many thousands of great saints, with countless others coming and going. Swami describes the Badri tree and its fruits, explaining its sweetness and lack of thorns. Even the demi-gods such as Brahma come to see the Badri tree regularly. The enormous size of the tree lends the name Vishala to the ashram. Uddhavji & Naradji are also residents of Badrikashram. The place is so pure that even the effects of Kali Yug cannot enter the Ashram and infiltrate the minds of the residents.

The background to Uddhavji’s arrival in Badrikashram is worth knowing. When God Shree Krishna decided He wanted to leave this mortal world, He called Uddhavji and told him to spread His true knowledge - Krishna’s true form known as Purushottam Narayan in His heavenly abode Akshar Dham, beyond all the cosmos and all creation. Uddhavji realised God’s physical presence in this world was about to cease. He could not contemplate an existence without God’s presence. After Shree Krishna passed on, Uddhavji was overcome with grief and searched for solace, instead of following God’s command. He knew Badrikashram was a very peaceful place, where numerous saints resided. He thought he would find peace and solace there. Uddhavji arrived in Badrikashram and did find great peace and experienced the presence of God, who resided there in the dual form of Shree NarNarayan Dev.

By The Almighty’s wish, hundreds of great saints, such as; Maitreya, Angira, Garg, Marichi, Vasishta, Atri, Valmik, etc. arrived in Badrikashram on one ocassion for the darshan of Lord Nar Narayan Dev, having completing a pilgrimage of Bharatkhand. Before meeting Lord Nar Narayan Dev, all the saints bathed in the purifying waters of the River Ganga. When the saints went towards the Badri tree, they saw Lord Nar seated beneath it, and paid due respect. Lord Nar, who was already accompanied by the Nine Yogeshvars, welcomed the above named saints. Lord Nar offered the saints seats of straw, and expressed His joy in meeting them. They were informed by Lord Nar that Lord Narayan will soon bless them all with His presence. The saints replied, “Oh Lord Nar! The best of all Mankind! You are The Almighty. Both You and Lord Narayan are one and the same. However, it is Your Greatness that You have assumed two images. Oh Lord Nar! We are very fortunate to have arrived here and meet You.”

At that moment, Lord Shree Narayan enters the assembly. The Lord has tied his hair up in a bun. His body is glowing from the severe prayers that He is undertaking. In one hand, the Lord carries a Kamandal (a vessel for carrying water). In the other, He carries a stick of Palaash. He is dressed in all white. Showering His divine sight over all the Rushis, Lord Shree Narayan enters the assembly, and sat Himself on the seat of straw.

All the saints paid their respects to Lord Shree Narayan by offering different items made from all types of flowers. By the grace of Lord Shree Narayan, all the saints went into trance and saw The Almighty God Supreme in Akshar Dham. When the saints opened their eyes, they saw the same image in front of them! All the saints thus prayed to Lord, “You are the all-merciful. Those who do not accept Your shelter by listening to the discourses from saintly persons are destroyed. Without Your shelter, no-one is happy. The only route to happiness is Your shelter, whether now or in a hundred years’ time. Oh Lord! You are beyond all that mortal and immortal. Being born of Dharma & Bhakti, You have undertaken prayers for benefit of Your followers. Even the great serpent, Shesha cannot reach the fathoms of Your glory.”

In reply, Lord Shree Narayan said, “Oh Munis, I am very pleased by your arrival. You are dearer to Me than all the demi-gods such as Brahma. I cannot forget you all, because of your most benevolent attitudes. You travel the world and give blessings to the pious souls and continuously remember Me.” “Oh Munis, where have you all just come from.” The Munis replied, “O Merciful One! We have just arrived from Bharatkhand.” “O Munis, having attained the human body, are the souls living according to My established rules?”, asked Lord Shree Narayan. The Munis responded sadly, “My Lord, there is no point talking about the religious conducts. Those kings and gurus who are entrusted with the responsibility of defending religion are themselves trespassing into immoral deeds. As a result, there is nobody to look after the people. The people of Bharatkhand have forsaken the path of Sadaachaar (moral conduct) and have adopted the paths of killing Brahmins, drinking alcohol, killing cows, theft, prostitution and the likes. As a result, the traffic on the highway to Yampuri (hell) is very congested. In these dire circumstances, there is no-one to teach and propagate the True Religion. Therefore, we beg You to show mercy upon the people of Bharatkhand and save them from such predicaments.”

Lords Shree Nar & Narayan explained to their parents, “Mother, Father, all these saints have come from Bharatkhand. At present there is rule of evil in the world. There is no-one to protect the people from such evils. These Rushis have brought such sad news.”

Everyone was very engrossed in listening to what Lord Shree Narayan had to say.

At that precise moment, the Almighty Lord encouraged Rushi Durvasa to come to Badrikashram. Halting his prayers, Durvasa left Kailash and arrived in Badrikashram and first bathed in the river Alak Nanda which flows close by. Having completed his mandatory Sandhya Vandan, Durvasa entered the Lords’ ashram and saw the gathering under the Badri tree. Everyone was so engrossed in listening to the Lord’s immortal words, that they did not realise that Durvasa had arrived. Having waited 1 Ghadi (equivalent to 3 hours) for someone to welcome him, Durvasa thought that everybody were insulting him, intentionally. As a result, Durvasa’s anger began to grow – his eyes became red with rage, his body began trembling – as if his body might explode due to the anger raging within him. He raised his arm and bellowed, “What a surprise! What a sad thing this is. Those who should be promoting good conduct are themselves adopting bad ones! Having acquired all the good qualities such as; education, yoga, knowledge, great heights of spiritualism, etc. these great Rushis have become arrogant and are now disrespecting me. Others I can understand, but even this Dharma, he is insulting me? I shall teach these people a lesson and revenge this insult!”

“Listen now you members of the assembly! Presently you are in the divine form, but you shall soon be cast upon earth and suffer at the hands of evil people and their evil deeds!”

Durvasa stopped speaking. When everyone heard Durvasa’s curse, the whole assembly came to its senses. Everyone looked behind and saw Durvasa in a rage of anger. All the Rushis ran towards him and paid due respect. They begged forgiveness from Durvasa, but in return Durvasa became angrier. Then the ever-peaceful Dharma came towards Durvasa, performed Dandvat Pranam and said, “What you have done is correct! The anger of great saints is always a boon to the wrong-doer. We were so engrossed in listening to Lord Shree Narayan’s stories that we did not realise you had arrived. Otherwise, we would have offered everything to you, not just our respects. You are merciful. Your heart is as soft as yoghurt. Please withdraw your curse.” Because of Dharma’s begging, Durvasa calmed down and said, “I never withdraw my words, but I don’t know why my mind has softened. So I shall bless you that God shall be born of Dharma & Bhakti and will save you all from the clutches of evil. Thus, you and the Rushis will be relieved from my curse.” Having said this much, Durvasa made his way back to Kailash.

Dharma, Bhakti & the Rushis were powerful enough to curse Durvasa back. However, forgiveness is the jewel of saintly people and besides, this curse was the Lord’s doing. In fact, Lord Shree Narayan could have stopped Durvasa from uttering a single word. He did not. So much evil had taken root in Bharatkhand that the Lord made Durvasa the instrument of His visitation.

Dharma begged of Lord Shree Narayan, “O Lord! Please save us all from the evil people.” The Lord replied, “O father! Do not fear at all. Whatever has happened was Purushottam Bhagwan's wish. Almighty Lord through this curse shall be born to you & Bhakti as a son and will save you all from the evil people and extinguish the evil activities while re-establishing religion with Dharma, Gnan, Bhakti & Vairagya. So, go and take birth wherever you wish on earth, without fear of anything.”

Dharma and all the others bowed down to Lords Shree Nar & Narayan and left for their respective ashrams. They all began thinking about where they would take birth. Dharma & Bhakti were born to religious parents in Itaar & Chhapaiya, respectively.