All Sadhus like the Naishtic Brahmacharis shall avoid sight of, speaking etc. to women and effeminate males and shall master all inner enemies like lust, anger, greed etc.

Now, a new subject begins here. My Sadhus (saints) who are my followers and absolute celibates should refrain from the company of females and effeminate males; should not look at them knowingly or converse to them. As there is 'etc' suffixed to such prohibited acts, such Sadhus should not massage oil and should not indulge in other such acts. There is risk of a fall from the vow of celibacy and saintly hood. It is said that a man who has not controlled his organs and if attracted to the charms of a woman would jump into the depth of the hell like a butterfly jumping into a flame. Also it is said that the one who loses his spiritual wisdom in charms of a woman, Gold, ornaments, attires etc sense objects of Maya (eternal entity) and thinks of pleasing his senses, destroys himself like a sightless butterfly. A Tyagi (ascetic) should not touch even a wooden statue of a woman by his big toe. Those are the words of wisdom from spiritually wise Dattatraya. Medha Tithi and Jabala Smriti says: Not to talk to woman, and should not remember a woman seen earlier. Should leave a Katha if it is by a woman, and should not look even at a drawing-picture-of a woman. Any ascetic, who indulges in any of these four makes his mind polluted and such pollution destroys him. Moksha Dharma also asks to stay away from a discourse by a woman. Saubhari Rishi says: A seeker of the knowledge of ultimate should discard the companionship of sensual, objects and should not allow his senses to be extrovert, should dwell solely in siclusion and concentrate in God meditatively in God. If desires a companionship, he should associate himself to a like minded (sanitly) ascetic.

To win the internal enemies like carnal desires etc. means to discard such enemies. Bhagwan says, 'There are three gates of hell destroying soul : Kama (carnal desires), Krodha (anger) and Lobha (greed), therefore, these three should be discarded. And Bhagwan had asked particularly about Kama (carnal desires) to leave it immediately: 'The Kama (carnal desires) and Krodha (anger) which are born of Rajas Guna are like a monsterous python and great sin, and should be recognized as great enemy. As a fire becomes dull due to a smoke enveloping it, and a mirror looks dirty due to the dirt covering it, and a foetus is covered by flesh, similarly this whole is covered by carnal desire. The knowledge of an enlightened one, is covered by the born enemy and ever hungry Kama (carnal desires). Oh Arjuna! Sense organs, mind and intellect are the tools-weapons of such Kama, and by these tools or weapons it veils-covers-the real knowledge and traps the man in Moha (spiritual ignorance). Therefore, Oh Arjuna! You control your sense organs and leave this sinful killer of ultimate knowledge. The indriyas (sense organs) are said to be beyond reach, the mind is beyond sense organs, the intellect is even beyond the mind Atma (soul) is beyond the intellect, know this Atma (soul) as beyond the reach and control such Atma (soul) with the help of Atma (soul). Oh Mahabaho! Thus by controlling soul, banish your undefeatable Kama (carnal desires) from within : Shrimad Bhagwat asks particularly for the banishment of Kama (carnal desires) and Krodha (anger): Oh King! As a medicine removes a disease, remove by listening the scriptures, the instinct of anger wich is an obstacle on your path of self benediction, you would be benedicted, because an angry man generates anxiety and fury in this Loka, therefore, a spiritually wise should aspire fearlessness and should not surrender to the anger.

is the cause of life and death. Moksha (salvation) means to be happy and satisfied by the reward of the destiny, a fraction of the greed destroys even purest fame of famous ones and destroys praiseworthy virtues of a virtuous one, like the disease of leprosy destroying the charms of a body. In Aapad Dharma of Bharat it is said elaborately that the greed should be removed as it the root of all sins, know more about this from that scripture. Narada has shown in Shrimad Bhagwat the ways, to overpower inner enemies: win your Kama (carnal desires) by mental steadfastness, defeat anger by forsaking carnal desires, sense objects should be discarded by thinking on their vicious effects, greed and fear should be discarded by concentrating on Ultimate entity, Shoka (sorrow) and Moha (spiritual ignorance) should be removed by worshipping spiritually greats, obstacles of the Yoga should be removed by Moksha (emancipation) and violence should be overpowered by detachment toward physical being. 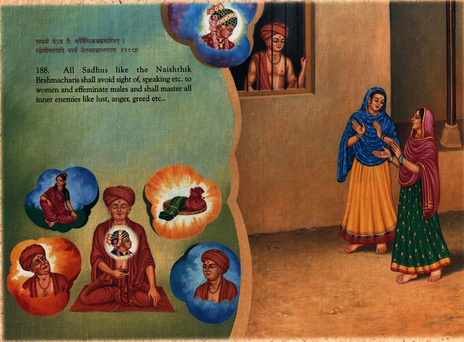