TThey shall not receive lessons of any kind from males who are not their nearest relatives and shall control their bodies an senses by frequent observances of various Vratas and fasts.

A widow should not receive education from the people who are not related to her, because it brings in untoward results. If such woman desires to listen and learn Katha-Varta of God, she should learn it from her father and brother or relatives, but in no case from others. That is the desired meaning of this preaching. Also, such a woman should punish and purify her body and spirit by undergoing Vratta and fasting time and again. That would purify her from unknown touch of an unknown man. There are more instructions in Nirnaya Sindhu in this regard: A widow decorating her hair locks in a bun, consigns her husband to hell. Therefore, she should either shave off her hair on the head or should tie it on her scalp like on ascetic. A widow should eat once in a day and should not eat twice a day, except in case of an emergency. She should under take month long fasting penance and should undergo chandrayana Vratt . Widow if sleeps on a bedstead, consigns her husband to hell. And a widow should not take oil massage on her person and should not ride a bull even for a cost of her life. She should not wear a bodice and should not put on a strange dress. Such woman should undergo special penance in the months of Vaishakha, Kartika and Maha, and should undertake special Vratt in additional month and in monsoon. Narada Purana says that a widow attracts sin if she does not perform Ekadashi Vratt: An ascetic and a widow woman are cosigned to the hell of Andhatamisra uptill the day of final destruction, if they don't do Vratt of Ekadashi. A widow, if eats food on ekadashi day, loses all her punya, and on even following day she attains sin of killing a brahmin. Above, was the observation of Katyayan. 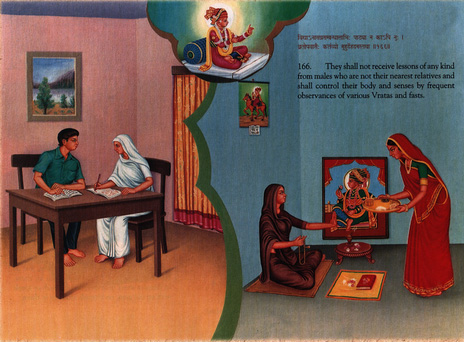