And if they are youth, she should not converse with them without a purposeful work, though they may be from relatives or non-relatives. This includes talking eye- to-eye. Achaarasaar says, 'A brahmin, a widow, a cotton cloth, an earthen utensil, etc become impure on a touch, shadow or a glance at it. The word touch needs a careful treatment. That is to be treated on this line: The scriptures have permitted a life of celibacy to such widow women who are either capable of living a life of celibacy or are pregnant or have infants to feed them. As a male celibate loses his hard earned celibacy on preaching Katha-varta to a woman or on a eye-to-eye look at the woman, in similar way a woman celibate loses her hard earned celibacy on listening to praises or follies of a man or on looking eye-to-eye a man. And loss of celibacy is loss of everything for them. Therefore, a widow should not touch a man. Smriti Artha Saar has said: A widow if becomes amorous on seeing a man, falls from her celibacy and goes to hell with her past three generations. Parashara has said: A woman with her wicked mind desires for other man, becomes a sinner and goes to hellish hell. Therefore, Manu Maharaj has said in Shudra Kamalakara: The woman, whose husband has expired, should burn to ashes root to leaves her sensual desires, and should not look even to the faces of other men. They should live a life of a celibate with complete hold on all sense organs. In the same scripture, Yama has said: Eighty eight thousand celibate Munis from Brahmin caste died without producing progeny practicing celibacy on death of her husband attains heaven like a celibate, though she may have no son. Here no objection to the touch by a near relative is applicable only in the case of her protection. Everybody should know this. Parashara also says: Deities too are incapable to know truly the acts, character and mind of a woman, then what could be said for the men on this earth with the mind torn by sensual desires. Therefore, such woman should be protected well by her father-in-law, brother-in-law, father and brother. The relatives should keep such woman under their control, as they are bound by their nature to becomes amorous. Manu Smriti says: They should not touch even to their relatives without an important work. This relaxation is valid for emergency work. In such circumstances there is no draw back if spoken or touched. In short, one should act in such manner so that the person and personal religion are not harmed. 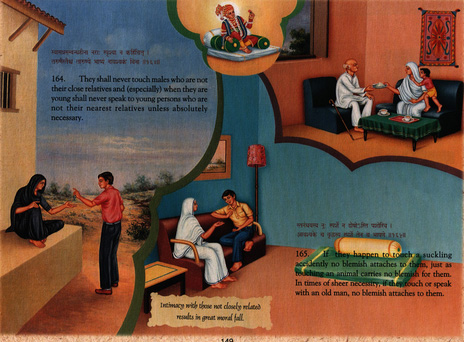