The devout housewife shall never keep her body without an upper garment and shall not dress in such a way that may expose her navel, thighs or breast to the viewers. She shall not look at persons of mimical nature and never make acquaintance with a woman who knows no modesty.

Chaste woman means a virtuous woman. The word has been kept in singular form to address whole lot of women. If they don't cover their breasts, thighs and naval it would become visible to the man. It means that there always should be an uttariya, should be large enough and properly woven so that it does not appear like that of a prostitute or a street dancer. These chaste ladies should not establish contact with those public women and cheaters. Yagyavalkya has said, 'The woman who lives in the interests of her husband, a virtuous life by controlling all her sense organs, earns fame in the family and society and attains heaven after her death.' Shankha Muni has said about this virtuous behavior: Should not go out without a permission from the husband, should wear uttariya properly. Should not move hastily. Should not speak to other man. Should not speak to a trader, ascetic, old person and Vaidya (doctor) without a purpose. They should not show their naval, should wear a dress upto their knee, should not uncover their breasts, should not laugh loudly, should not be malicious towards the husband or the brothers of her husband. She should not come in contact with a prostitute, a cheater, a lady messenger, a woman ascetic, a woman with black magic, a cheater woman, a woman with jokular nature and an ill - tempered woman . As an association with a non - virtuous spoils the chastity. Therefore, it is to be concluded that a company with evil minded should be avoided. Bharata says: Drinking wine, company of the evil minded, separation from husband, sleeping in day time and to pass time by sitting in others houses are the six evils for a chaste woman. Sleeping in day time and excessive sleep are forbided.

The attributes of a chaste woman are as under: She is sad in the pains of her husband, she is happy in happiness of her husband. She lives a dull and unglamorous life while her husband is away from her. She sacrifices her body in fire and becomes a Sati an death of her husband. The chaste woman with these attributes attains respect like great woman Arundhati. Here, the suggestion of becoming a Sati is only for those women who are not desirous of moksha and are not capable to live a life of celibacy and are desirous of the pleasures of heaven. If they are not acting in the like manner, they would indulge in debauchery etc evil acts and will draw her generations in the hellish pains of the hell. Great saint Garga Muni has said, 'The woman, who after the death of her husband, lives a free life would be consigned to hell with her three generations. Therefore, the woman who can not live a life of a celibate, would be a fit case for becoming a Sati. Moreover Manu Maharaj has said, 'A saintly woman either should have to live a life of a celibate or should become a Sati after her husband.' Brahmvaivarta Purana says: There is no path for a woman in Kaliyuga for attaining her ultimate destination except the path of becoming a Sati after her husband. For this, Nirnaya Sindhu provides a scholastic treatise: This is only for those woman who are not capable of maintaining celibacy in their everyday life. Mitakshara treatise of Acharadhyaya says: Those women who have no desires of Moksha and are desirous of tempting pleasures of heaven, should become Sati after their husband. 'The heavenly pleasures are very much available in the state of absolute celibacy as per Kashikhanda of Nirnaya Sindhu. The woman practicing widowhood after the death of her husband, gets her husband again and enjoys heavenly pleasure with her husband. Mitakshara may be referred for more details on this topic. 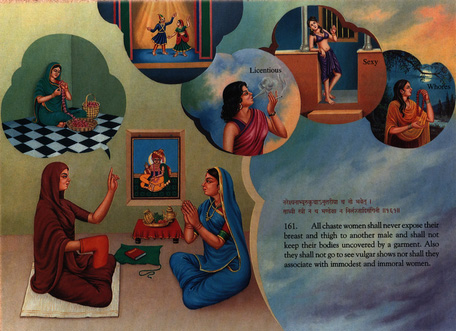