Recollecting their income and expenses incurred during routine and/or special transactions, they shall daily write clearly in their own hands, an account thereof.

In all his dealing in income and expenses, one should recall very well each such dealing each such day of dealing and should note it down neatly and in legible handwriting himself. It should be in good Akshara (meaning : alphabets - letters). Word Akshar thus, has two meanings one is 'writings' and another is 'Moksha' (emancipation). It should be written by himself, not by others. Getting it noted by others may cheat him. In Rajdharma treatise in Niti Shastra, it is said that cheater document-writers write the documents in a language of dual meaning and in illegible handwriting that deceive an owner by taking away his money. 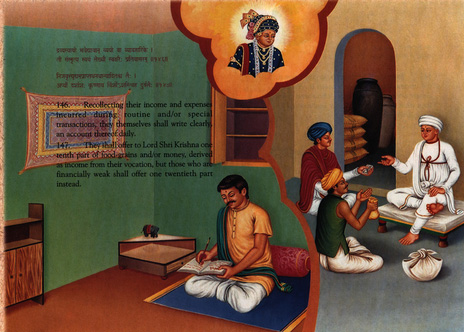