All my followers during their lifetime shall serve their parents, Guru and ailing person, according to their ability.

My followers should serve their real and step mother, father, Guru (preceptor) for whole life, within their capacity. Manu Maharaj has said, 'the pains and troubles tolerated by the parents on birth of a child can not be repaid by a service for the century. Therefore one should please his parents and his Acharya - preceptor. All penance merges in the pleasure of those three. The service extended to these three is called penance.

These three Vedas are called three fires. Bhagwan has said in Bhagwat, 'The man can not repay the obligations even in a century of his manes, who have given him the body and have nourished it. The son who has wealth and has physical power, if fails in looking after his ancestors, eats his own meat, after the death. 'The man who is strong and powerful, but shall be like a living dead, if he does not look after his aged parents, faithful wife, younger son, preceptor and a surrendered one. To serve his preceptor and father is a religious duty of a virtuous son. All these are the words of the deities, in relation to service. Skand Puran has said, 'The perceptor and father should be served regularly. The man who does not serve them as per his personal capacity suffers hellish pain in Raurav Hell. In Mitakshara treatise of Vyavaharadhyaya of Yagyavalkya it is prescribed by Narada that the son opposing his parents should not be given his due share of succession. 'The real son who has become a minor sinner or, an opponent of the father or, a fallen one or has become inpotent can not receive a share in the property of his father, then how could a step son could get a share? Further, serve to the ailing people, within personal capacity. Ailing includes weapon injuries, and its pain. Parashar Smriti says,' The people suffering due to pains of illness, fire and weapons should be served mercifully within one's personal capacity by the food, water, medicine and personal services. Yagyavalkya has compared the service of helping an ailing man with the donation of a cow. Both these earn equal amount of Punya: to carry a tired person, to serve a sick person, to worship God, to offer an honoured wash to sacred feet of a Brahmin and to clean left-overs are the acts equivalent to Go-daan. 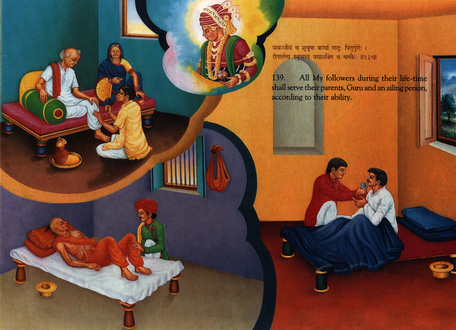