My male followers who are householders shall not touch widows who are not their nearest relatives.

Now in this special Shloka tells special religious duties of the householders. My followers, those who are in second Ashrama - Grihastha Ashrama (householders) - should not touch widows who are not in nearer relation but are very distantly related or not at all related to them. Nearly related means such relation in which a defilement takes place on her death. Widows means such women, whose husband his expired. Such ladies - widows - should not be touched by a householder devotee . Because their touch is inauspicious. In Skand Purana, great Rishi Agastya has said, 'In all inauspicious objects, a widow is most inauspicious, therefore, if she is not in nearer relation, a wise man should not touch a widow.' Further, in the same scripture, it is said, 'The blessings of a widow are like poison of a snake, if seen her on a departure out side, it definitely brings one's death.' As Shloka has 'etc' suffixed to touch,therefore, a conversation or ligher talk too should not take place with such woman. 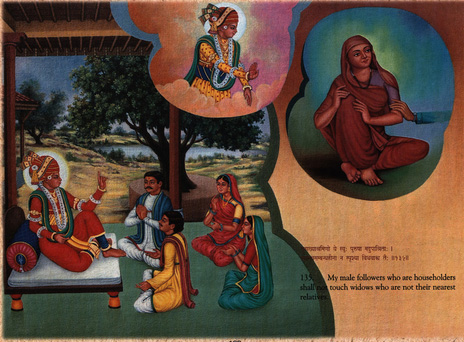