No one should level false accusations against anyone, even for the sake of achieving some self–interest or shall utter indecent words/abuses to others.

Lord Swaminarayan now describes the various sins committed by man verbally, through impure and uncontrolled speech. Note that sin is accumulated through physical (bodily) action, through speech and through impure thought. Lord Shree Hari, in this Shikshapatri has made a point to address all such methods of committing sin.

Mithyapavadaha - false accusation; thus one should never falsely accuse somebody of something, especially in order to acquire money. It is said that to falsely accuse results in sin that is greater than even the five deadly sins. So much so, that Prayaschit for the five great sins is given in Shastras, but no such information is given for false accusations.

Yagnavalkya writes, 'If a great sin is committed and somebody is falsely accused of such crime, then the accuser receives double the sin of actually committing the crime. He also receives the sin of lying and for falsely accusing. Additionally the accuser inherits other sins committed by the accuser.' Hence it is quite striking that such an act can have such mammoth consequence and so one must never falsely accuse anyone, adopting the philosophy of 'innocent until proven guilty'.

The Mahabharat explains, 'Those who speak harshly, who slander others, who are cruel and who speak without thinking are reborn upon this Earth as a deer or a bird.'

There is a great Gujarati saying, 'Vani ane pani gari neja vaparvu' - Water and speech should be sieved first and then used, it should always be cleansed. Speaking without thinking causes great sin. The consequence of such action could be devastating to a person. Indeed, our Shastras forbid broadcasting an embarrassing truth. Thus, it is unacceptable to glorify the fact that a person has committed sin, even if the sin has been committed by the person. Instead, you should have a one-to-one discussion with the person in order to put him back on the right track and resolve the situation by suggesting a course of action to dissolve the sin. One should never use the situation as a means of generating money through bribery.

Now let us consider the second part of this Shloka - never to hurt, abuse or swear at anyone. There is a saying, 'The lash of a sword can be cured often, but the lash of abuse can never be cured.' Thus, what we say to another person can often leave deep scars and so must always be controlled.

Through inappropriate speech, swearing etc, it is said that one's Punya is washed away. Therefore, never even in a state of anger, should you hurl abuse at anyone. One must always maintain absolute control over their speech. Swearing and abusive language is undesirable in a person - indeed it defames a person.

Many have a habit of swearing. Even though this habitual swearing may not be in order to verbally abuse anyone, it is none the less wholly undesirable and such tendencies should be reversed. This habitual swearing is developed to the stage where every sentence spoken contains a swear word.

We all know of Shishupal's consequence of hurling abuse and insults at Shree Krishna - THE DEATH PENALTY! Therefore one must realise that to speak in such inappropriate manner directly, indirectly, intentionally, or unintentionally is a great sin with grave consequences.

The voice is a powerful tool and must be used with care and consideration. Effective communication in society, groups and committees should always be practiced, because only then can there be stability and unification. To speak blatantly without regard can lead to a break down in a community. People must be willing to listen to each other and we must all learn to use the power of speech effectively for the betterment of society.

Arguments often start because communication has broken down or because somebody has said something which is offensive to another, and for that reason it is very necessary that we master the art of speaking. 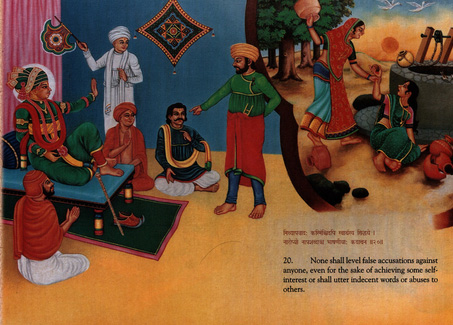