Accepting water or cooked food from the people of some category is forbidden by scriptures. My follower shall not accept it even if it happens to be an offering to Lord Krishna. But the same can be accepted if it is an offering to lord Jagannatha in Jagannathpuri.

Shastras forbid the consumption of food and water given by certain persons. The categories of these persons are documented in scriptures and include prohibition through caste, country, community and family. Such food and water should not be taken even though it may be Prasad of the Lord.

However, Lord Swaminarayan says that those prohibitions do not apply at Purushotampuri (Jaganathpuri). To take such food or water anywhere else results in a sin called 'Sankarikarana' says Vishnusmruti. Such sin results through killing an animal as well and thus we can realise how important this directive is. Prayaschit for this sin involves living off water only, for a period of one month.

It is written that, 'To obey one's caste laws results in the strengthening of one's Bhakti, Dharma and Gnaan.' Thus it is extremely important to obey these laws that apply to a person through his caste. These laws are here for man's own benefit, so much so that even 'Prasad' is not always pure generally. Those who disregard these laws can never derive Bhakti, Dharma, and Gnaan.

During the installation ceremony of Lord Jaganath, the main thirty-three God's came to witness the ceremony. Brahma, Vishnu, and Shiva were present. During the ceremony, cooked rice was offered as Prasad to the congregation. However, in the hustle and bustle of things, much of the Prasad fell to the floor, not reaching many of the Gods, saints and people. Though the Prasad was on the floor and crushed by the feet of those present, many picked the cooked rice from the floor and ate the Prasad.

Lord Shiva also picked some Prasad from the floor and ate it. Lord Brahma who began to ridicule Shiva, refusing to eat it himself witnessed this. Brahma then looked towards the idol of Jaganath but could not see it - it had become invisible to him. He began to question "Where has Lord Jaganath gone?" Shiva then spoke, "We can all have Darshan (sight of) the Lord, why is it that you cannot?" Brahma deluded, then came to the conclusion that, "Maybe it is because I did not partake in Prasad, I did not have faith in the Prasad." So saying he picked up some rice from the floor and ate it. Instantly the vision of Lord Jaganath came to him and so he was finally able to have Darshan of the Lord.

The Prasad seemed unacceptable to Brahma for the greatness of such Prasad deluded him. For this reason the Prasad at Jaganathpuri is considered to be prominent and great and so Rishis have praised it adequately by allowing such Prasad to be taken regardless of restrictions otherwise. Taking of such Prasad has great benefit and results in great Punya.

Indeed any Prasad (sanctified food) in accordance with Shastras have great benefits to those who partake in it. Such blessed food leads to the person who eats Prasad to be also blessed. Many say that the power of Prasad is beyond comprehension, deriving Punya equivalent to numerous fasts (Upavaas). Prasad is said to contain spiritual powers or even miraculous powers and hence the greatness of Prasad can never be fully praised. It is food or drink that is first offered to God and then consumed by us and so it is divine food, pure food or sanctified food. Thus Prasad should never be under estimated as 'just ordinary food or drink.' For such reasons it should be a point for all households, that they always make offerings to God before they themselves eat in the home as a family.

I write this because many are unappreciative of Prasad. Many fail to see greatness and so end up not taking Prasad or even throwing it away and ridiculing it sometimes. There is a saying, 'Jevu Ann Tevu Mana' - The mind is affected by what you eat. Thus by eating such Prasad, the mind also becomes pure and healthy. 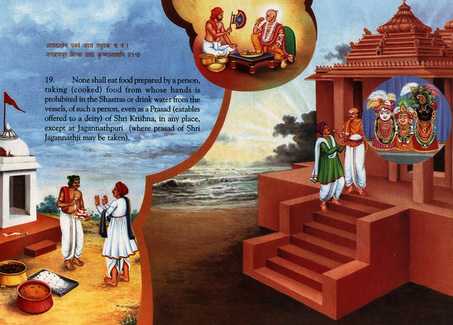