None shall ever commit theft, even for the sake of performing an act of Dharma. Even articles such as firewood, flowers, etc. owned by others shall never be taken without their permission.

The Lord forbids the act of stealing: Stainkarma Na Kartavyam - even to the extent of forbiding taking something for religious or 'Dharmic' reasons - Dharmarthampi Kenachit. Shatanand here explains the unacceptability of use of articles or wealth earned dishonestly in the name of Dharma (such as donations). Such use is without merit and even sinful. Daandharma of Mahabharat explains, 'Only wealth gathered through hard worked, through honest means is meriteous and proper. Only such worthy wealth should be employed in righteous activities. By donating such pure wealth to Brahmins and the poor, one removes sin.'

Mokshadharma says: Na Kartavyam Paradhanmiti Dharmaha Sanatanaha - 'To not steal is considered as Sanatan Dharma - the eternal law.' It further adds, 'Those who steal from others definitely attain hell.' Danakhanda of Skanda Purana and Yama Smruti say, 'Those who steal lose all their Punya (benediction) to those who they steal from.' Linga Purana for such reasons of undesirability of stealing writes, 'One should control such urge to steal by removing it from mind, speech and action.' Shatanand instructs that even in times of financial difficulties, one should never fall servant to urges of stealing. None, including a Guru or Acharya should steal says Shatanand. None should take even flowers etc. without the owner's consent, for that is considered as stealing also. Smruti defines what stealing is: Tat Stayam Yadupadanamnagnapraptapradatyoha - 'Stealing is to take without permission or consent.' Gautam Muni goes so far as to say, 'The hands of a person who take grass, wood, flowers and fruits without the owners permission are fit to be cut off.' Furthermore Vishnu Smruti explains, 'Killing of insects or birds, partaking of intoxicants and stealing food, wood, flower results in a sin called Malinkarma.' Hence stealing is considered to be equivalent to killing insects and birds and consumption of intoxicants. For this reason one should always refrain from stealing. Shankar in Mahabharat explains, 'Those who do not even think of taking something that belongs to someone else will definitely reach the Heavens.' There are various exceptions to the rule of stealing or taking without permission: Yagnavalkya and Shankha Muni write, 'Brahmins may take flowers and grain for offering in a Yagna. Similarly to take grass for a cow would not be considered as stealing.' Manu says, 'Poverty stricken Brahmins who take two sugar canes or two radishes (Mura) should never be punished.

Similarly to take a handful of grain that seemingly does not belong to anybody would not be considered as stealing. Also to take a handful of food on the fourth day after being without food for three days would not be considered as stealing.' Shatanand concludes by saying that in every case, the permission from the owner should always be taken if in any doubt. Stealing is a great sin regardless of what others say. Ten pounds earned honestly will be shadowed by the fact that you have earned one pound dishonestly. The problem needs to be put into context for it has become somewhat an epidemic. It has to some extent, become a bad habit. Stealing has many forms, many of which may not always be obvious. We may even pass off these 'steals' as little and negligible. 'Fiddling' is often a cover word for stealing. Fiddling the tax, falsifying information or lying for personal gain, all constitute stealing. We must all realise that God is the very embodiment of truth - 'Sat'. He is not interested in any wealth offered to him which is earned dishonestly and so to use such wealth in Dharma Karyas is futile and sinful. Therefore it is imperative that our wealth is earned honestly. Stealing is taking that which is not rightfully theirs to begin with. We should learn to accept that which is ours and not have this urge to further our wealth through dishonest means. Many commit all sorts of sin to increase their wealth, further their standard of living and to enjoy the luxury and happiness derived from this. Only through truth (Sat) will we gain a level of consciousness (Chit) which derive eternal bliss (Anand). Thus devotion to Satchitanand God and obeying the truth will derive eternal happiness. Wealth is never a means to eternal happiness.

Such sinful wealth for personal pleasure will linger in the family for generations and ultimately the generations will suffer great pain as a consequence. The West worship wealth, it is what all strive for. However Eastern tradition and precepts are to the contrary, for they teach that God is the highest pleasure and wealth is often something which leads a person away from God. We must learn to be satisfied with what we have because only then, will we be able to put everything else aside and worship the Lord unreservedly. 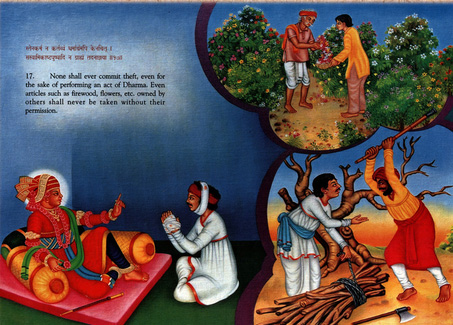