(My followers) shall never kill goats and/or other living beings in sacrifice performed for the propitiation of deities and Pitris (ancestors), for non–violence is declared (by the Shastras) as the highest Dharma of all the Dharmas.

Many religions condone a ritual of animal sacrifice as a way of pleasing the Gods! Although such actions are prevalent in cults, some ranks of 'Hinduism' which themselves should be considered as cults condone ritual animal sacrifice. Lord Swaminarayan here stipulates the greatness of Ahimsa outlined in the previous Shloka by saying that even sacrifices to Gods (Himsa Yagna) is wholly unacceptable - deriving untold sin.

It is ludicrous to even think that God would be pleased by killing a creature made by himself. Only a fool would think that someone would be made happy by destroying that which he creates.

Shatanand Muni here suggests that we should not physically kill, speak to kill, nor even think to kill another creature (of God). Such is the Great Dharma of Ahimsa.

Our respected Maharishis of the past have established Ahimsa as Mahaan Parama Dharma the highest of Dharmas. It is a Dharma that is mentioned in many of the prominent Hindu scriptures including the great Mahabharat. 'Satya Vrata Raja performed Himsa Yagna (violent) thinking that he would attain the Heavens - instead it was the cause of his destruction as the fruits of his austerities were destroyed.'

'The foolish have interpreted the Vedas incorrectly. They have preached what they perceive to be the truth that is instead false. In this way, these ignoramuses, without intellect, have preached the Adharma of Himsa (violence) as acceptable.'

Narad Pancharatra adds, 'The Shruti (revealed scriptures) are considered as the Mother of the Earth. They preach only compassion towards all and strive for betterment for all. This is indeed the message of God, which does not even utter a single word of violence towards others.'

God in all instances has preached love towards all. This universal love stems from the fact that all creatures have a commonality, an Atma - the soul which is simply a spark of the Param Atma - God Supreme. Indeed all that exists is God in one form or another. Therefore to harm another is to inadvertently harm God and so the Dharma of Ahimsa should always and everywhere is cherished. Narad has explained to Prachinbharish Raja - 'Behold O King! The thousands of Jivas (souls) which have met their death at your hands through sacrificial Yagnas wait eagerly for your death in order to reap their revenge upon you. They angrily wait to inflict the same pain upon you by hacking at your body with axes.'

Shree Bhishma has explained, 'Of all acts Ahimsa is the greatest says Manu (Sarvakarma Svahimsa Hi Dharmatma Manurbhravit). Towards all creatures, the Dharma of Ahimsa is considered to be the best (Ahimsa Sarvabhutebhya Dharmebhyo Tyayasimata). There is no other better Dharma than that of Ahimsa towards all beings, it is beyond comparison.'

The use of flesh in Pitru Yagna such as Shraaddh is strictly forbidden also. Parashar Muni writes, 'Shraaddha involving lament and repentance will certainly bring liberation, but never one which involves the use of flesh.'

Vasudev Mahatmaya of Skanda Purana says 'One should never use meat in Shraaddha. Only Muni-anna (Samo, Namar etc) milk, Ghee etc should be used as use of such things will have the desired effect - liberation for ancestors.'

Vyaas has written: Sarvatha Sarvada Sarvabhutanaamnabhidrohaha Ahimsa - 'Ahimsa is refraining from violence always, everywhere and towards all.' Such a Vrata is considered as Sarvabhaumi Mahavrata and is equivalent to the great Vratas such as Satya (truth) and Brahmcharya (celibacy). In a discussion between the Devas and Maharishis in the Mahabharat it is said, 'The killing of calves is despicable. Killing of any animal is not the Dharma of Man.'

It is important to clarify what exactly Yagnas are. Yagnas are a way of pleasing the Gods. Offerings are placed into Agni (fire) and thus given to the God of Fire who distributes these offerings to all other Devas. In return all the Devas shower their blessings upon you and effectively you derive their favour and support. The Shastras say Ajaina Yajeta that is only Aja - which are such things as rice should be offered in Yagnas. Aja is not animals as many people have concocted.

It is written in Narad Pancharatra, 'So called Shastras which prescribe Himsa are not true Shastras and should not be accepted by man.' Our true Shastras teach compassion to all creatures, for they are all part of God. We must accept that all creatures are equal and never do unto them that which we would not want done to us.

Mahabharat says, 'Those who perform Ahimsa Yagna will surely attain Brahman (the heavens). However Himsa Yagnas will only consign a person to hell.' Therefore we must never partake in Himsa Yagnas by accepting Prasad (remnant) of such a Yagna. Indeed we must never partake in any kind of meat in any situation for Parashar Muni has said, 'Eating meat will never lead a person to salvation.'

Narad similarly says, 'Partaking of vegetarian foods will attain salvation (Moksha).' Mundak Upanishad narrates a story where a King who performs Himsa Yagnas is visited by Narad Muni and is put into Samadhi (deep trance) where he visits Narak (Hell). The shocked King, reawakening from Samadhi is then told by Narad that the consequence of Himsa is an eternity in that same Hell. Thus the Adharma of Himsa is strictly prohibited in all ranks of true Hinduism. 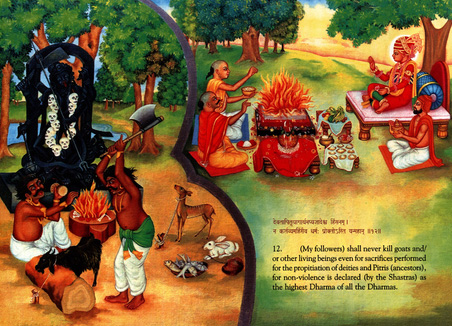