I, Sahajananda Swami, staying at Vrittalaya (Vadatal) write this Shikshapatri to all my followers living in different countries. (Vrittalaya means a place of good conduct).

Lord Swaminarayan is clear in pointing out that he himself is writing or has written this Shikshapatri. The contents of this Shikshapatri are from the Lord Himself. Thus it is comparable with the Bhagwad Gita as the Gita was sang by Shree Krishna himself.

Therefore the Shikshapatri is truly divine with wisdom which is beyond this realm. It is unsurpassed, indeed it is the very manifestation of God, whose sole purpose is to benefit and uplift mankind.

The Lord uses the name 'Sahajanand Swami' instead of any other name. Shatanand explains the significance of the use of this name. Sahajanand was the name given to the Lord by his Guru - Shree Ramanand at the time of Bhagwadi Diksha - initiation as a Sadhu. 'Sahaj' is understood as natural or consequently is lead to mean - to be born with no specific reason. 'Anand' is bliss, therefore, Sahajanand is bliss or happiness that is brought about unintentionally - it is natural bliss. Thus Sahajanand is the deliverer of such natural and pure happiness.

This is really how happiness should come. People look for happiness in material objects. All to often they look for it in the wrong place. People become obsessed in their quest to derive such bliss.

However, their quest fails miserably as they find refuge in materialistic objects that provide only temporal bliss. Those who don't necessarily look for bliss derive it through their spiritual faith. This is the prosperity and goodwill that is bestowed upon them by God himself. This happiness is permanent. By worshipping the Lord, having faith in him and by seeking refuge at his feet through pure and good conduct, man becomes a repository for untold riches. Thus, this should be the aim of all - to please the Lord via worship unto him.

Also, personal happiness can only be derived through another's happiness. Ultimately we should aim for, and wish for the Lord's happiness first and foremost. As the Lord resides in all creatures we should strive to provide for all beings: shelter the unsheltered, feed the starving, cloth the unclothed etc. Through such action we please and win the favour of God.

Shatanand finally says that 'Sahajanand' is he who gives happiness to mankind. Such was Lord Swaminarayan who during his time upon this Earth uplifted the masses. Through this Shikshapatri he continues to provide a means to a greater end. This Shikshapatri is a letter (Patri) which teaches knowledge (Shiksha) for the betterment of mankind, showing the path to spirituality, peace and ultimately the heavens. 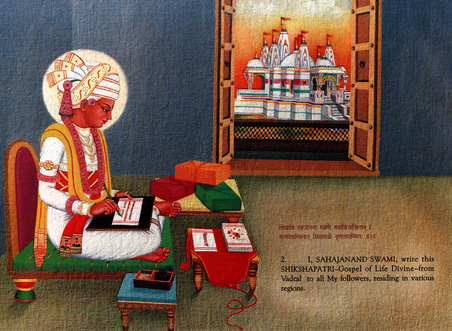